The history of Morro de Sao Paulo is very old and is closely intertwined with the history of Brazil. Originally it was inhabited, like all the coast of Brazil, by the Indios, with precision the Aimorès. It is believed that the first European to explore the coasts of the island was Martin Afonso de Souza in 1531 but the true founder of the village of Morro was the Spanish Francisco Romero in 1535.

In the same year the villages of Boipeba and Cairù were founded, and in this last was built in 1654 the current Franciscan convent of Sant'Antonio. From 1580 began a period of frequent attacks by the British and the Dutch on the Brazilian coast; dates back to 1610 the construction of the church of “Nossa Senhora da Luz” on the hils of Morro where today is located the Lighthouse, on the initiative of the Saraiva family.
Often the Dutch tried to invade the island, just as the pirates threw anchor in the coves, generating many stories, many years later, on the hidden treasures.

Faced with so many undesired visits, the construction of a fortress, that has undergone so many changes has begun, which took more than a century to complete.

Only around 1746 was built the Fonte Grande to supply water to the population.

Since the 1950s the island has started to be occupied by vacationers, mostly from Salvador and other neighboring towns.

In 1992, by decree, the islands of Tinharé and Boipeba were declared a protected zone "Área de Proteção Ambiental".

The Morro de Sao Paulo is located in the extreme north-east of the Tinharé, an island that is part, together with  Boipeba, Cairù and other 23 small islands, of the Tinharé archipelago which is located about 60 kilometers south of Salvador in the state of Bahia.
The islands are separated by large mangrove channels which are often accessed with difficulty. The most accessible area of ​​the archipelago is precisely the east coast where the village of Morro of Sao Paulo is located and where, despite deep sea depths, there are swimming beaches protected by corals. The villages of the archipelago all rise along the sea and depend on the activities related to fishing and tourism, the main islands of Tinharé are Morro de Sao Paulo, Gamboa, Galeao, Zimbo, Garapuà and Canavieira; on the island of Boipeba there are Velha Boipeba, Moreré, Monte Alegre and Sao Sebastiao; finally, in the island of Cairù is the municipality of Cairù (seat of the prefecture) and Torrinhas.
One of the characteristics of the Morro de Sao Paulo, which makes it a fascinating and unique destination, is the absence of paved roads: the movements take place on foot or on horseback, freight transport is carried out mainly by boat or tractor along the beach. Most of the islands of the archipelago were originally covered by the Mata Atlantica (forest), currently although there are still large areas with virgin forest, much of the territory is occupied by vast plantations of coconut palms.
Since 1992 the islands of Tinharé and Boipeba are part of an Environmental Protected Area: it is therefore important a responsible attitude by the population, local entrepreneurs and tourists themselves to preserve and protect such a precious and delicate naturalistic area. 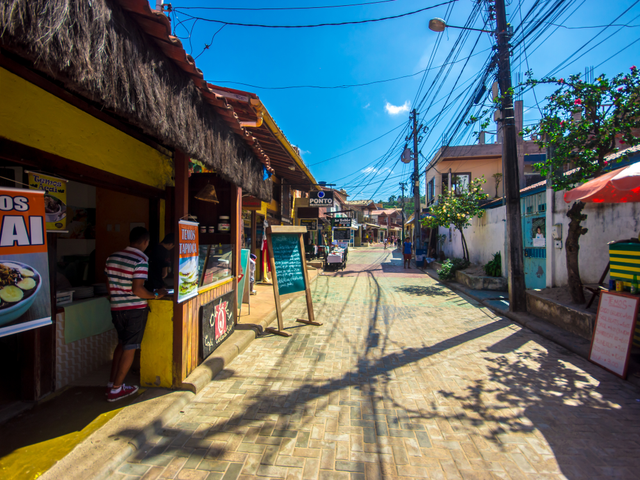